Old Point Monument is a landmark of interest to every student of the history of New England and is of special interest to citizens of Madison for, here, within her bounds, came the tragic end of the Norridgewock tribe of Abenaki Indians who had for generations roamed this region unmolested.

The death of Reverend Father Sebastian Rasle and the wiping out of the Norridgewock Indians was due to warring between the English and the French to obtain the portion of land where the Indian settlement was located.  The monument, erected in 1833 on the supposed site of the massacre by English troops, stands as a silent reminder of the life and labors of a man whose only offense was devotion to the people he served. 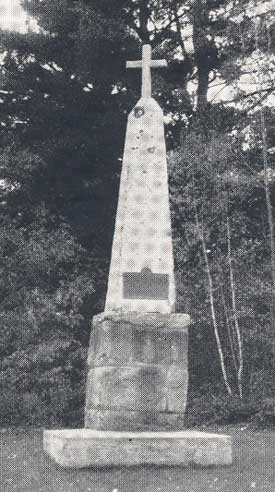 The first recorded arrival of the white man to Madison is that of Reverend Father Druillette, who passed through this town in 1646 on his way to Cushnoc (Augusta) to establish a Mission in response to a request for a mission by the Abernaquois Indians in this section.  The second recorded arrival of the white man here is that of Reverend Father Rasle who settled here, according to some historians, in 1697.  He was the builder of the first church edifice in town.  The interior of this church was said to be extremely beautiful for the time and place.

The story of the events leading to the death of Reverend Father Rasle is one of dramatic interest.  Father Rasle, giving the indians counsel and acting as their representative in many conferences with their enemies, won the hatred of the English.  Affairs reached a climax when a formal notice was given to the English by the Indians to vacate certain Indian lands of which they had taken possession.  This notice caused trouble between the Indians and the white settlements. The English, considering Reverend Father Rasle responsible for the attitude of the Indians, offered a large reward for his capture.  Troops were called out and three times an expedition was sent out for the capture of Father Rasle, but they were unsuccessful. 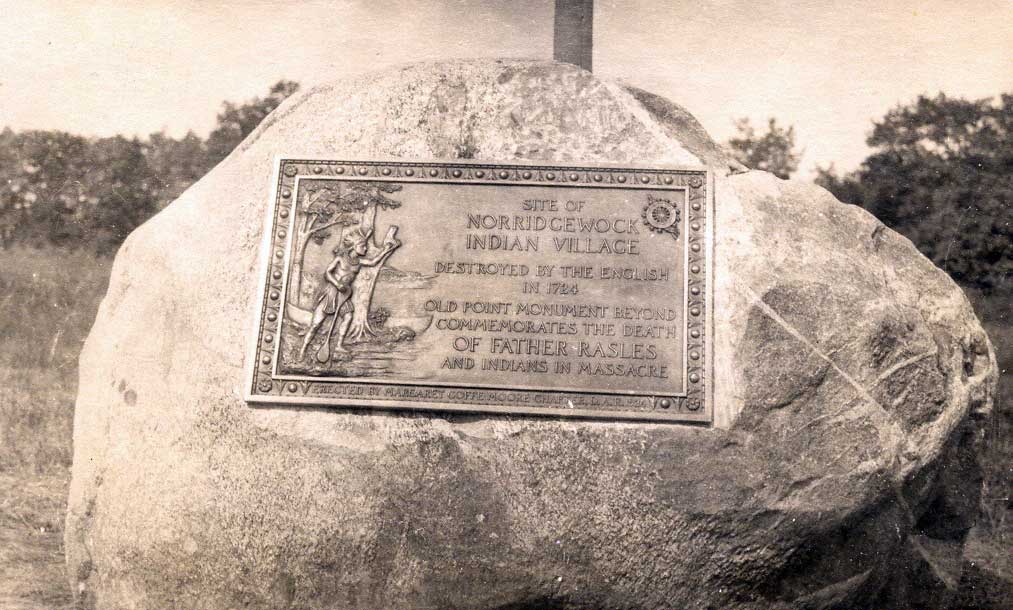 The forth attempt was made in August, 1724, when English troops, led by Captains Moulton and Harmon, set out from Boston, coming up the Kennebec River in whale boats.  On August 24, in a surprise attack, they advanced upon the indian village which was at once in a panic.  Father Rasle, riddled with bullets, fell at the foot of the cross he had erected with his own hands.  By his side were several loyal followers, seven of whom died with him.  Other indians, in the attempt to defend their homes, were killed and wounded.

The purpose of the expedition was accomplished and the village wiped out as the few indians who survived fled to St. Francis, never to return to this valley which had been a peaceful home for years before knowledge of the white man.

A granite monument, bearing the name of Reverend Father Rasle, who gave his whole life even to death itself to the betterment of his indian neighbors, was erected in 1833.