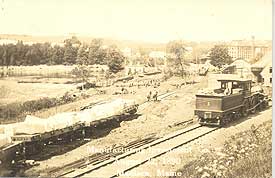 Everything came in by rail until WW II was over.  When the freight came in, the first thing to be handled was the baggage car which handled the mail.  The railroad also carried passengers as well as baggage and freight.

From 1895 to 1928, the Somerset Traction Company ran a trolley from Madison to Lakewood, and then to Skowhegan, providing an opportunity for people to enjoy Lakewood's attractions and to go back and forth to Skowhegan.

The toll bridge, built in the 1800s, was carried away by a freshet in 1901.  It was replaced with a free bridge constructed of iron, and 20 years ago was replaced again.  This bridge replacement was featured on the front cover of the 1974 Annual Report. 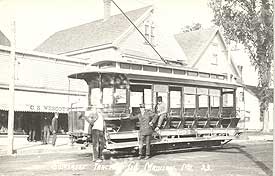 On May 30, 1906, the covered wooden railroad bridge over the Kennebec burned, probably from sparks thrown up by a steam locomotive.  A new iron replacement bridge was built in 24 days!

From 1895 to 1928, the Somerset Traction Comapny ran a trolley from Madison to Lakewood and then to Skowhegan.  The Trolley track wasn't taken up until after 1940.

After the war was over, Fox & Gin Trucking came on the road and in 1948, they shut down the freight trains of Maine Central Railroad.